Uncovering the Mystery of Centuries-old Pawnshops

Pawnshops often seem mysterious to many people, but a secondary school teacher devoted three years of his life visiting various pawnshops of different sizes across Hong Kong, with the aim to uncover the mystery of this old industry. 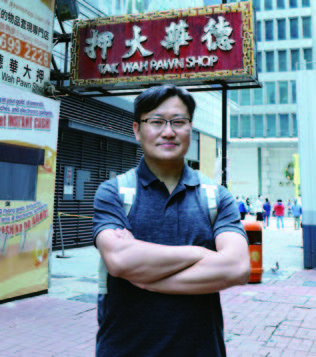 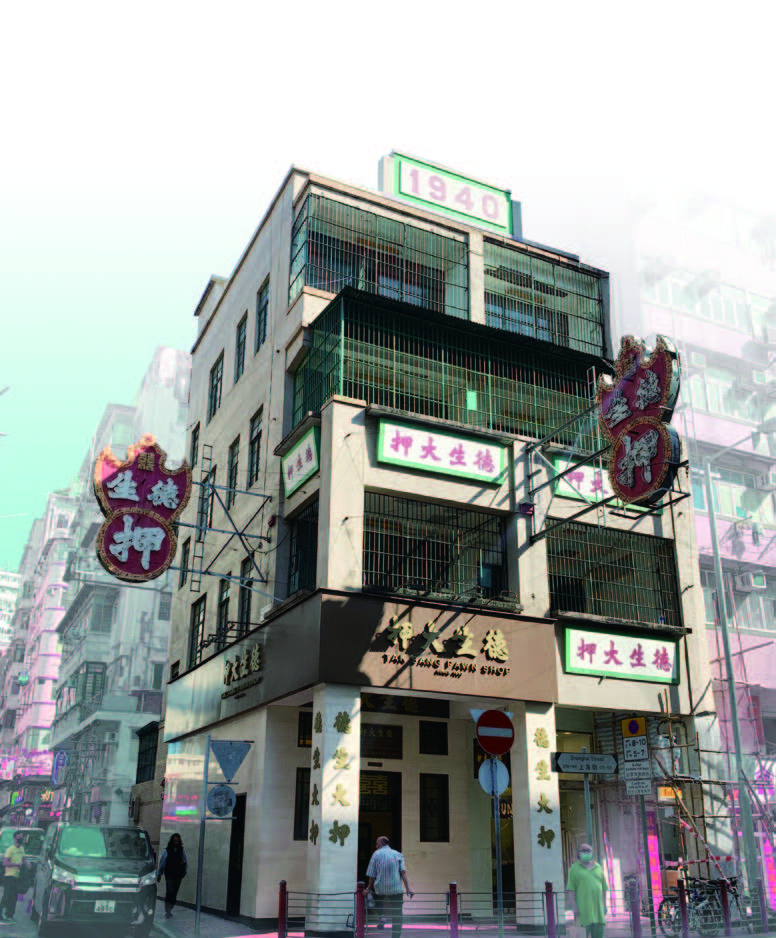 Hong Kong people are accustomed to calling pawnshops ‘Dong Pou’ ( 當 舖), but all the pawnshops’ signboards do not have the character ‘Dong’, but the character ‘Aat’ ( 押) instead. This is distinguished by the pawn periods and interest rates for the pawned items, and the pawn periods and interest rates of ‘Dong’ are longer and higher than ‘Aat’.” Chui Chun-pong, a researcher of Hong Kong history and culture, is a rare find as far as knowledge of pawnshops is concerned, because he may be the only person who has visited all the pawnshops in Hong Kong.

“By chance, I came into contact with a publishing plan about pawnshops, and I took part in it without hesitation.” So he made up his mind to visit all the pawnshops in Hong Kong. While experiencing the pawning process in person, he chatted with ‘Ji Suk Gung’ (a worker who identifies and appraises the pawned items) to gather first-hand information. “I have published two monographs, which are a record of the times for Hong Kong pawnshops.”

The world behind the shield

Pawn brokerage gives people the impression that it is a sunset industry in decline. However, according to Chui, there are still more than 180 pawnshops in operation in Hong Kong, and new ones would emerge from time to time. The most familiar design in pawnshops all over Hong Kong is probably “the shield” (a shield standing in front of the main gate, used to hide the inside of the shop). "The shield is actually for the sake of customers. In the old days, entering a pawnshop meant being in financial difficulties, and Chinese people wanted to hide it from others as they didn’t want to lose face.” 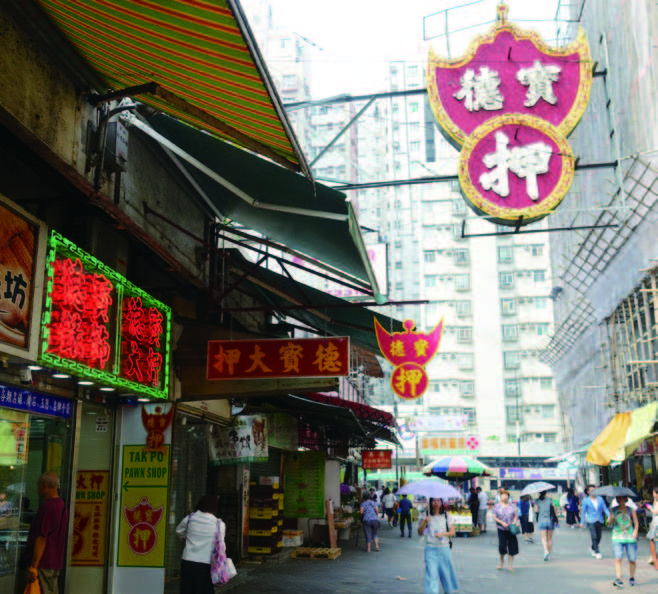 “Once, when I was walking out of a pawnshop after my research visit, I saw a passer-by who looked very much like a parent of one of my students. I immediately felt a little embarrassed. It is evident that visiting a pawnshop does bring some kind of mental stress.”

Regarding the counter of the pawnshop, which is typically taller than the average person, it is said that this design is meant to stress the superior status of the pawnbroker and make the customers feel they are there to seek help, which naturally reduces their bargaining power. However, Tsui believes that the design of the counter is actually more motivated by anti-robbery considerations. “The reason for the high countertop is that the pawnbroker can not only have a good view inside the shop, but also what is going on outside the shop. In contrast, people outside the shop will have their view blocked by the shield, so they cannot see what is going on inside. It is really a very clever design.”

The most important feature of pawn brokerage is that there must be a physical item to pawn for money. The pawn brokerage industry in Hong Kong is currently regulated by the Pawnbrokers Ordinance, which provides that the interest rate charged shall not exceed 3.5% per lunar month for an amount not exceeding HKD100,000, i.e. an interest of HKD3.50 has to be paid when redeeming a HKD100 item after one month, and so on. However, a pawnshop cannot survive on interest income alone, so it actually gets most of its profits from selling pawned items that were not recovered by their owners within the deadline for loan repayment.

In addition, pawnshops have to bear the risk of price fluctuations. For example, as the price of gold fluctuates greatly, pawnshops must be very accurate in appraising the value of the items brought in for pawning, otherwise they will incur losses. “Another example is mobile phone, which is now generally accepted by pawnshops. Some familiar buyers of electronic products will check at pawnshops regularly to see if they can buy cheap items.” 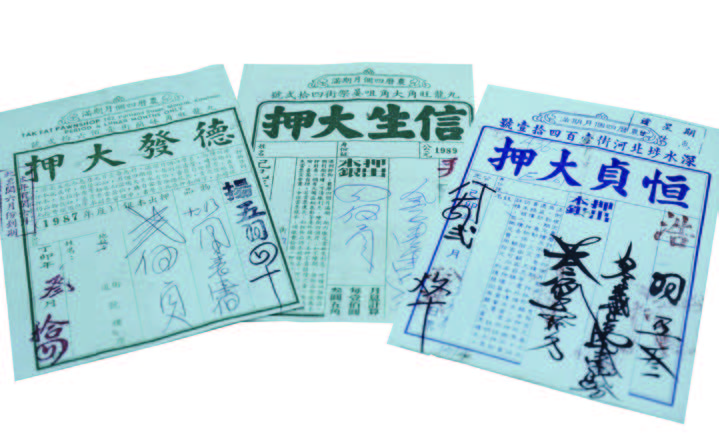 Switching focus to FDHs as time and situation change 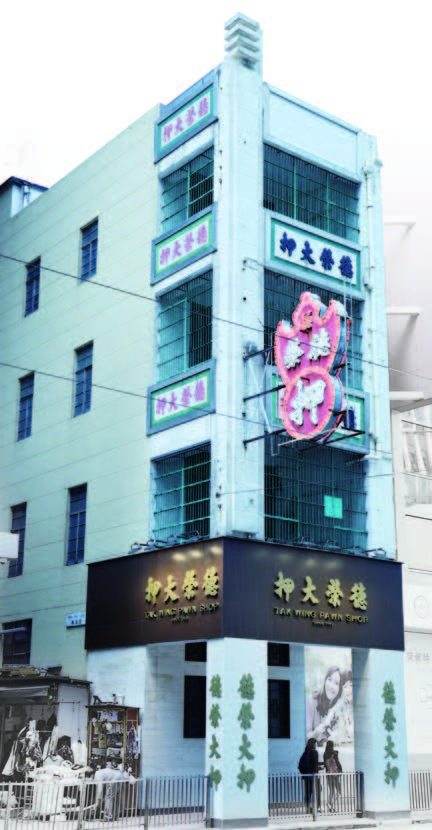 Chui noted that increasingly fewer people are going to pawnshops as there are now many borrowing methods available, such as credit cards, banks, finance companies, etc. “For young people, the most valuable thing they have is probably just their mobile phone, which they will certainly not pawn for money. Hence, I am considered quite young among the customers of pawnshops.”

Chui added that pawnshops are actually aware of the predicament and have been exploring new sources of customers. “It can be seen that foreign domestic helpers (FDHs) have become a major source of customers for the pawnshops in Central.” Chui believes that this is because FDHs have limited options to borrow money as they may not be able to apply for a Hong Kong credit card and banks are unlikely to lend them money. Moreover, many FDHs have to shoulder the burden of earning a livelihood for the entire family, so they might as well patronize a pawnshop when they urgently need money. Chui is convinced that pawnshops will not disappear in the near term because there is always a demand for them, and many pawnshops own properties, so even though there is not much business, they are unlikely to go so far as to closing down. However, the needs of the society must be met in order to develop further. 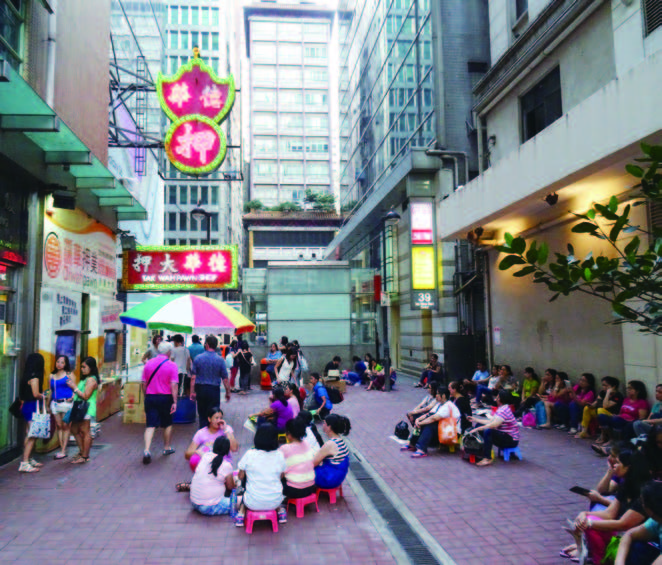