Faced with severe shortages of land and housing, the government needs to increase efficiency and expedite the implementation of the relevant measures in the Policy Address. 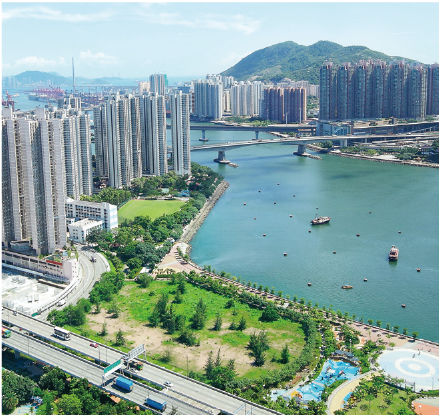 Hong Kong society has been threatened by continuing violence for the past six months, but despite the HKSAR government making every effort to stop violence and curb disorder, the deep-rooted social conflicts will require positive action to resolve. This is particularly true in terms of the severe difficulties faced by many citizens who find it impossible to purchase their first flat or be allotted a public renting housing (PRH) unit as a result of housing shortage and high property prices caused by Hong Kong’s lack of land. This year’s Policy Address continues to focus on housing and land supply, which is the right antidote. Housing is not just a commercial product, but rather about providing people with a suitable place to live; as such, it is the foundation of social harmony and stability, and the current government has therefore oriented its housing policy towards addressing this issue.

On 1 July, the Legislative Council Complex was damaged recklessly by rioters, forcing the Legco to suspend many of its activities, including work on dozens of applications to allocate funds related to people's livelihood. These include funding for the studies of the Lantau Tomorrow Vision land reclamation project, which consists of 1,000 hectares of artificial islands near Kau Yi Chau, providing approximately 150,000 to 260,000 housing units, 70% of which is public housing. This has not been put on the agenda yet. Since the Legco has resumed its meeting, its first priority has been to deal with funding applications related to people’s livelihood. However, debates on other recommendations involving the supply of land and the creation of land reserves have already met with delays in other meetings, and obtaining funding from the Finance Committee is expected to be far from easy. For this reason, it will be necessary to look at alternative routes and take resolute, unconventional measures to address the housing issue for Hong Kong residents as quickly as possible.

Hong Kong currently has a total of around 1,300 hectares of brownfield sites, more than 58% of which, or approximately 760 hectares, are in rural areas of the New Territories. However, the sites are scattered throughout the areas, involve a hodgepodge of different sizes, and lack infrastructure support. If they are to be developed, it will take time to reclaim and clear them. The government has already planned and is currently proceeding with projects covering a total of 340 hectares, including the New Development Areas in Kwu Tung North, Fanling North, Hung Shui Kiu and Yuen Long South, as well as a further 200 hectares in the New Territories North strategic development area. However, the first residents will not be able to move into private housing in these New Development Areas until at least 2023-2024, while the public housing is not expected to be available for residents to move in until 2026-2027 at the soonest. For Hong Kongers desperate to purchase their first flat or move into a PRH unit, this is “water afar off quenches not fire”.

According to the report produced by the Task Force on Land Supply, there is widespread support among Hong Kong residents for developing brownfield sites, while a research report on the distribution and status quo of brownfield site operations in the New Territories will also be completed by the end of the year. The first order of business for the government should therefore be to use these resources to determine the feasibility of developing the 200 or so hectares of brownfield sites in the New Territories, as well as going through the total of 760 hectares of brownfield to identify a group of sites that have development potential and can be prioritized. Besides promoting brownfield development at the earliest possible opportunity, the government should also proceed with creating tower blocks that can accommodate brownfield businesses in the Hung Shui Kiu New Development Area and Yuen Long South as soon as possible.

Leaving space for operators in brownfield areas to survive

Businesses in brownfield sites often harbour doubts with regard to the suitability of tower blocks for their logistical and other needs, while rents can also prove less affordable than ordinary brownfield areas, directly affecting their ability to survive. The government should take resolute action to provide financial support and use statutory powers to reclaim private land, including brownfield sites, for public use, in order to expedite preliminary and first-phase work on the Hung Shui Kiu New Development Area in order to develop housing estates and tower blocks. The Policy Address proposed using the Lands Resumption Ordinance to take back private land needed for public use, letting Hong Kong residents know that the government is proceeding with land planning for the short, medium and long term.

In my proposal last year for the introduction of a Pilot Project for Public-Private Partnerships to Develop Farmland in the New Territories, I suggested that the government could consider expanding the Starter Homes Pilot Project for Hong Kong Residents in terms of public-private partnerships to cover all newly-built public housing initiatives. Later in the Policy Address , the Chief Executive referred to the Land Sharing Pilot Scheme, the development direction and principles of which mandate that at least 60-70% of land is used for the construction of public housing to be offered by means of subsidized sale. However, the wait for public housing is already as long as 5.4 years, while the most recently published figures show an increase to around 257,500 applications. If we are to get close to the original goal of getting people into public housing within three years, we must take drastic action to ensure that the proportion of newly-built public housing in such “pilot projects” is no less than 70%.

Bolder action could be taken for land sharing

The government announced a framework for “pilot projects” some time ago and expects to receive the first applications in early 2020. However, pilot project approvals are subject to an upper limit of 150 hectares of private land, so bolder action may be needed in terms of pilot projects with regard to the major private developers, each of which owns at least 1,000 hectares of farmland in the New Territories. As town planning and other statutory and administrative procedures still apply to pilot projects, and the government has also created a new consultancy taskforce to comprehensively review applications, there is an ongoing lack of clarity in terms of when land will actually be made available to relieve the pressure of housing demand on Hong Kong residents.

In order to confront the issue of severe land and housing shortages, the government must increase efficiency, expedite the implementation of the relevant measures in the Policy Address, and take charge of efforts to identify more land that can be used to build public housing in the short-to-medium term, as well as unleashing the development potential of land by “according priority to transport infrastructure”.